You’ve probably heard by now that The Travel Goods Show is headed to New Orleans March 4-5, 2020, but the new host city is just the beginning.

The 2020 Travel Goods Show is going to be a landmark event, with some of the biggest changes wrought in Show history. Read on for a taste of what’s to come, and what it means for the industry – retailers and manufacturers alike – as we build a new Show, one positioned to be a stable force for growth in the times ahead, adapted to the current reality of how business is done.

We’re living in the most disruptive period in retail history, thanks to the dual forces of manufacturing globalization and the Internet, which has empowered direct-to-consumer sales and become an indispensable part of commerce. Online engines enable product companies and retailers alike to order stock from partner vendors, track those shipments, even divert them or amend them en route. It’s an extremely disruptive environment – business norms of 10, even five years ago, are no longer practiced today.

There are only three ways to meet disruption: Surrender and fold, die a slow death continuing with business as usual, or change the playbook. It’s time for the industry to change things up, and The Show is leading the way. “I believe The Show is an island of stability in a sea of uncertainty,” said TGA Board Chair David Lomas, who recognizes that the challenges facing the industry are manifold. “Instability worldwide, whether it’s government tariffs, Middle East tensions, Hong Kong disruptions, Brexit, etc. Plus the increasing influence of the Internet and the increasing consolidation of vendors such as Amazon. And, of course, the decline of brick and mortar retail. But both vendors and retailers can rely on The Show to provide the best platform for innovative design to present to customers. After all, buyers can’t buy if sellers don’t sell.”

Trade shows the world over are struggling, as cash-strapped companies elect to rely on online outreach over face-to-face interaction with their customers. It’s a short-term strategy that, arguably, results in false savings. Foregoing the expense of a trade show exhibit does remove a line item from the year’s financials – but it’s a risky move as well, as it can spur feelings of abandonment with longtime customers, leaving them vulnerable to temptation by trade show newcomers.

“The strongest bonds in life, not just business, are the personal ones. It is impossible to strike a true deal unless it is face to face and not over email,” said Lomas. “That is why just two days out of everyone’s busy lives to attend The Show is a great investment.” Personal interaction is unbeatably powerful. It’s why even Amazon, the ultimate online retailer, currently operates 13 Amazon Go retail stores and is building free product return centers inside every Kohl’s department store nationwide – to build customer engagement in ways impossible to do online. If online were the be-all, end-all, Amazon would be shuttering Whole Foods locations since its acquisition of the upscale grocery chain two years ago – but it’s expanding, with more than 40 new stores currently in development, to foster that all-important in-person interaction.

Two Days in the Big Easy

One of the most significant changes for the upcoming 2020 Show will result in less bottom-line Show expense for retailers and exhibitors alike, as The Show shifts to a 2-day, Wednesday-Thursday format. For attendees, this will result in reduced lodging expenses over the previous 3-day run. For exhibitors, the Wednesday start eliminates the added cost of weekend travel and booth setup.

“We wanted to get everyone focused and we felt that limiting The Show to two days would do that,” said Lomas. “This will reduce exhibitor costs as there’s no weekend setup,” referring to the Sunday surcharge for weekend/overtime labor charges for booth setup by event service providers like GES and Freeman. The Wednesday Show opening means everything can be accomplished on a weekday, even if the booth is so intricate as to require a 2-day setup. “There will be lower hotel costs as all vendors will save at least one night. Plus this will keep buyers on the floor longer,” he said, referencing the extended Show hours of 8:00 a.m. – 5:30 p.m. both days, which will help make up for the reduction in exhibition days.

“Retailers will also benefit from reduced costs for TGA-sponsored hotels,” Lomas continued. “They can attend The Show and travel within the U.S.A. during the working week, which helps with work/life balance.” This also means retailers don’t have to take weekend days away from their stores, which are typically the busiest shopping days and when they’re most needed on site. For 2020, delaying The Show opening until Wednesday will also help boost attendance from retail buyers, as it provides further calendar separation between The Travel Goods Show and Europe’s I.L.M. Offenbach Show (which ends March 2 next year), simplifying logistics for exhibitors and attendees who must be present at both events.

The 2020 Show won’t be held in Las Vegas, its home the last few years, for the simple reason there isn’t space available in town during the Show’s optimal, late-February to late-March time window. The Show can’t be too early in the year for prototypes to be completed, and it can’t be too late in the year for retailers to place orders, which is a narrow booking window on venue calendars. Moreover, other calendar events that must be taken into account include Chinese New Year (which can adversely affect prototype and production delivery) and Passover (which can impact retailer attendance).

Scheduling in 2020 was particularly daunting, as it marks the return of CONEXPO-CON/AGG, the big construction expo, to Las Vegas March 10-14. This is a huge event taking place every three years – the 2017 version’s 2,800+ exhibitors occupied more than 2.8 million square feet of exhibit space, and drew nearly 128,000 attendees. CONEXPO’s weeks-long setup and teardown (exhibits include demonstrations of road-laying equipment and 3D-printed excavators, for example) effectively locks out all convention space in town for over a week, displacing dozens of shows on either side of the calendar. End result: No suitable space in Vegas during our slender time window.

New Orleans is a terrific host city. Like Las Vegas, NOLA embraces tourism. It’s a destination town, being one of the oldest settlements in the U.S., and a tremendously popular cultural draw. It’s the birthplace of jazz, arguably the most American musical genre; and it’s a gastronomic nexus, world famous for its cuisine. Bottom line: Plenty of available flights and lodging, which helps hold travel expenses down. And it’s appealing for the travel aficionados amongst us, providing an additional travel incentive for buyers who might be on the fence about attending otherwise and who are longing for a new Show site city after five consecutive years in Las Vegas.

One obvious change that will be apparent the minute you set foot in the exhibit hall: Smaller booths. Booths sizes for 2020 are capped, with a 2,000-square-foot maximum. This was a very considered decision by the TGA Board, to build a better Show experience for attendees and exhibitors alike.

For attendees, eliminating giant booths shrinks The Show’s overall footprint, which makes the exhibit floor much easier to walk. “No long treks down huge, wide aisles,” said David Lomas. It also concentrates the attendees in a smaller area, creating more personal interaction and engagement that builds group energy – the same reason political rallies and society mixers are always held in too-small venues. “Being more compact increases the energy in the room, as a crowd creates a buzz. And of course it’s much, much easier to navigate and uses less energy as attendees don’t have to walk so far,” explained Lomas.

A booth-size cap also forces exhibitors to focus on new-for-this-year items, the principal draw for retailers, helping them cut to the chase and get right down to business. For industry veterans, which includes most buyers, The Show isn’t about seeing everything, rather it’s all about what’s new – and this will help.

Reduced booth size also forces exhibitors to employ more consideration with presentation strategies, saving money and netting stronger results. “In other shows where the footprint per booth was reduced, where my company has exhibited or visited, it has improved the quality of the booth,” observed Lomas. “We use better graphics, etc., and more thought has to be put into using the space efficiently. Bigger isn’t better – better is better.”

Also helping make The Show better next year: Aggressive outreach for new buyers and exhibitors. “TGA staff and the Board have boots on the ground at trade shows in many crossover industries,” said TGA President Michele Marini Pittenger. “We are attending events like Outdoor Retailer; NY NOW, the home/lifestyle/gift show; the International Home + Housewares Show; the Global Business Travel Association Convention; the COTERIE women’s apparel, accessories and footwear show; and others to look for new ideas, new exhibitors and new buyers. And we are actively investigating partnership opportunities with other trade shows.”

TGA has worked aggressively to keep current exhibitors coming back. “In the last several years TGA has cut our exhibit space fees and membership dues in half, to encourage more companies to exhibit and join the Association,” said Michele Marini Pittenger, who noted that this goes against the trend – expo hosts do not reduce their fees, much less by half. It’s an aggressive move that speaks to how valued Show exhibitors are. And The Travel Goods Show remains free to attend for retailers, unlike many trade shows.

The 2020 Show is being promoted through an unprecedented online advertising and PR/social media campaign, with the intent of pulling in new attendees from crossover markets such as outdoors, housewares and lifestyle. It’s a bold move, but warranted and timely. In a world where travel goods are everyday items, where you can buy laptop cases and USB power banks at CVS and Walgreens, The Travel Goods Show should be of interest to other buyers beyond our core travel goods specialty retailers.

“I strongly believe that we need to work together in a positive way to protect and enhance our industry. Without the op-portunity to talk to each other, not just in the booths, but also at the opening night party, we have no way of effectively supporting each other,” said David Lomas, speaking as current Chair of TGA’s Board of Directors. “The TGA Board is a great example of this. It is a mix of suppliers who are natural competitors, and retailers who are natural prey for those suppliers. Jungle rules do not apply at Board meetings! Egos and sales opportunities are left at the door and we all work together for the best interests of our Association. It’s sometimes a little heated which is good, but it’s ALWAYS positive. The Show is just a bigger version of that. Together we are stronger and without The Show there is no opportunity to help each other keep our industry vibrant, positive, and most importantly, profitable.” 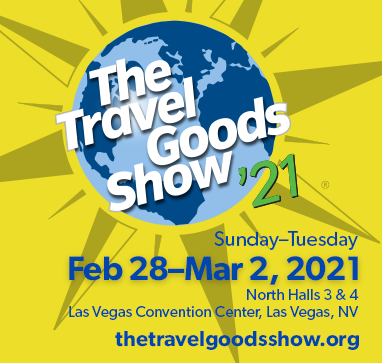 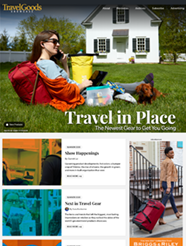