On November 27, the California Office of Environmental Health Hazard Assessment (OEHHA) withdrew its January 16, 2015 proposed regulations which would have repealed the warnings language in Proposition 65 and added new warnings requirements. OEHHA has now published a new proposal that addresses warnings under Prop 65. A public hearing on the new proposed regulations will be held on January 13, 2016. Written comments are due January 22, 2016. TGA is now preparing its comments on behalf of the industry. 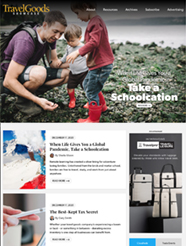 When Life Give You a Global Pandemic, Take a Schoolcation
Remote learning has created a silver lining for adventure-loving families.
travelgoodsshowcase.org